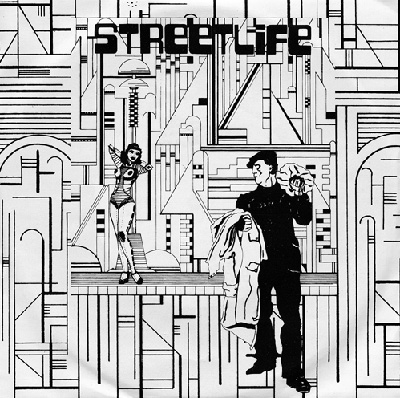 In 1979 Steve moved from Montreal to San Diego to form Streetlife with childhood friend and original music partner John Kargacos. They met in Sunday school at the age of four, became best friends, and later learned to play guitar together.  John played a Telecaster through a Fender Twin, with roots in players like Robbie Robertson and Jerry Garcia. Steve has often said John was the best guitarist he ever played with.

John was also a great songwriting collaborator. The band played a mix of covers and originals. In those days bands played all night—and had to keep people drinking and dancing. They played some weird gigs—Navy clubs with MP’s chasing stoned sailors around while the audience screamed for “Free Bird”—to weddings—(what were they thinking?)—to exclusive parties where the costumes cost thousands of dollars and people rode into the party on horses.

Kargacos had a great ear for figuring out songs and the band used to do some wicked versions of classics ike “Whipping Post”, “Born to Run”, and “Deacon Blues.” They had a great local surfer-drummer, Jeff Stasny.

Recording meant a label back then. Streetlife sort of went after it but there were occasional misconnections. As Steve put it, “An acquaintance from San Diego (who happened to be gay—it’s relevant) hooked me up with Bill Graham’s organization. So I went to Marin County to Bill Graham’s house, the old Doris Day home in Tiburon, where I was to meet Zohn Artman, Bill Graham Presents’ Resident Wizard, as his business card said—and Zohn shows up at the door wearing nothing but his silver silk boxers. He seemed visibly disappointed to see that I was with my wife. But he recovered and was very gracious. He showed us his gargoyle collection and accepted my demo tape. We didn’t get deal though and later I realized that was one crappy demo tape in the first place.”